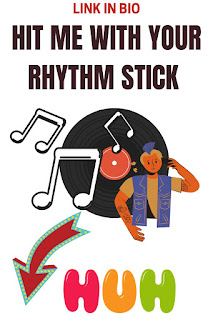 In a desert of Sudan

And the gardens of Japan

From Milan to Yucatan

Every woman, every man

I think this was the coolest moment of my life. The sad part was that I didn't realise at the time. Hit Me With Your Rhythm Stick was released in 1978. It was the first record I ever owned. I think it was purchased for my brother and I by Uncle Roy. Such a lovely man, my Dad's brother, who sadly passed away from a heart attack in his early 40s. There really is no fairness in life, at times.

Like all the people we have loved and lost he is in my heart and mind.

Thank you for all you did to make my life special.

At the age of nine you have a pretty simplistic view of life. I guess it varies from one kid to the next.

I remember years later, running for my school and one of the sprinters had a beard and sideburns. He was over six-foot tall, a stride of a giraffe and won the 100 metre in impressive style.

Maturation has a lot to answer for.

I loved the song: Hit Me With Your Rhythm Stick. I must have driven my parents mad playing it time after time on the old record player. It was a 7'' vinyl (45). Three minutes and forty-three seconds of pure enjoyment.

Like most things, vinyl records went out of fashion before becoming trendy again.

Mum wouldn't let us play the B-side: There Ain't Half Been Some Clever Bastards in case it corrupted our minds even more than they already were.

I remember my cousin used to buy all the latest hits. If you ordered them, you could get your chosen record in different colours, rather than the generic black. He had all these neon-coloured records in pink, green and orange. To be honest, I can't remember if they had other colours. Being one of few kids with the patience to wait for a neon vinyl record to arrive at the shop, he found his record collection worth a small fortune some thirty or forty years on.

I wonder if he had a few hit singles from Ian Dury And The Blockheads?

I had no idea what this hit song was all about. I liked the sound of it. It was a powerful song and I liked the ferocity it was sang.

Hit Me With Your Rhythm Stick was written by Dury and Chaz Jankel and the groups most successful single.

It reached No 1 in the UK Charts in January 1979 (our birthday is on the 13th, so it must have been a present for that occasion).

It was a hit around the world and has sold over 1 million records. However, it took until 2004 when downloads were made available as it had stalled at 979,000 on the original chart run.

It was originaly held at number 2 for a couple of weeks by the the Village Peoples' smash hit Y.M.C.A.

At the age of nine, I just loved the song and Ian Dury & The Blockheads. I didn't realise that he had contracted polio at the age of seven, most likely from a swimming pool at Southend-on-sea during the 1949 polio epidemic. His illness resulted in the paralysis and withering of his left leg, shoulder and arm.

What's interesting is that Dury went to Chailey Heritage Craft School, for disabled children, who believed in toughening them up, which contributed to his observant and determined outlook on life.

And that's what I loved about Ian Dury.

Although someone who could have given up on life and considered himself at disadvantage you couldn't have been further from the truth.

He lived life to the full and displayed a winning attitude and an exceptional talent in all he did.

If anything such disadvantage proved to be his advantage.