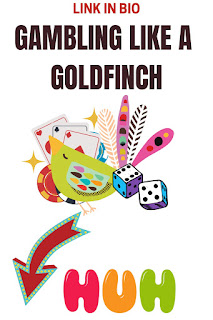 I'm a bit of an ornithologist.

That's your common or garden birdwatcher.

People like what they like, hey. I find it difficult to understand why many people don't enjoy wildlife, but they may wonder why I don't wear a Made In Chelsea t-shirt and look like a dick.

That's just my idea of a joke.

I enjoy wildlife because it brutally honest, often to a harrowing level. I guess it's that way because compared to the majority of the human race we are one-step removed from the hunter gatherer mentality. In the sense we go to the butchers to buy a leg of lamb rather than shoot it with a bow and arrow.

What I like about nature is that evolution creates a little, beautiful, goldfinch with the gift to survive. Biologically, instinctively and behaviourally it is cutting-edge.

In essence, it is exceptional at living within nature.

You try it for a month, you have lost the aptitude.

If you were as good a gambler as a goldfinch is being a goldfinch you would be the best gambler on planet Earth.

It would be your life, and those of your ancestors. You would be bred to be the best gambler in the world.

You wouldn't believe your eyes.

If this person played blackjack they would know when to bet with the most effectiveness and efficiency.

You would sit at the table and you wouldn't be able to comprehend how good they are at winning. You would be mesmerized by the stack of chips before them. But what you would notice as much as their winning would be the way they interact with their environment. In fact, it would be at such a high level of sophistication you wouldn't even be able to see it. The surface structure would hide the deep structure of their ultimate process. Everything would be worked to make the most of every opportunity.

When you meet a real professional gambler you won't even notice how good they are. Because they incorporated within their mastery an ultimate deception for those who look on from afar.

The only reality of the observation is the money they win, which they will hide.

If you wish to be the ultimate gambler, watch a goldfinch, how it lives and works within nature. It will seem foreign compared with our understanding of modern life but if you look through their eyes consider what they see.

How they think. An understanding built by survival.

It is almost impossible to appreciate their perception but you can learn so much by questioning and asking why. Imagine for a moment if your life depended on the turn of a card, a bet placed, your success or failure ultimately linked to your existence.

That card would be viewed from a very different perspective.

The improvement you will see within your gambling will be beyond your comprehension.

Within nature we have an opportunity to learn.

If you don't look in the right direction you fail without understanding.

The brutality of a world where survival is key to your success details a level of excellence that by its very nature is something you should desire.

Read our last post: The Richest People On Planet Earth