The Richest People on Planet Earth? 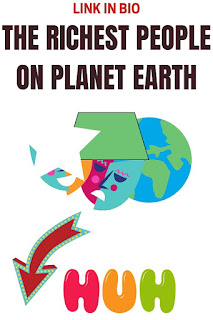 How do we measure the worth of a person?

In today's world your worth, my worth, their worth is based on bank balance. As they say, money talks. Even from a religious point of view the Bible says: ''Money answereth all things.''

But, remember, that is all things you can buy.

And we all know, the most important things, relationships with others, often have little to do with pounds, shillings and pence.

(I know they do too, but you know what I mean).

It often makes me wonder what the richest people on planet Earth are all about: Elon Musk, Jeff Bezos and Warren Buffett.

How much money do you need?

Perhaps all of these people get a bad press. Perhaps they get a good press. I'd like to think they are very generous giving money to help others, support charities and making the world a brighter place.

I have no idea what they do.

It would be a sorry state of affairs if they were truly mean spirited like a modern-day Scrooge.

Something tells me they are not.

My approach to having such wealth would be finding ways to give it away to people who really need it but in a way that helps them look after themselves.

The fishing rod rather than the fish.

It doesn't do anyone a favour to be dependent on others so the only way they get money is when they have a disaster because you will find their life is one long disaster and they will eternally follow a road to the poor house and skint because of a lack of learning as much as wealth.

Year's ago, while studying for a degree in Psychology with the Open University I worked one day a week at the Isle College, in my birth town of Wisbech in Cambridgeshire.

They used to say the capital of the Fens had a worse crime rate than New York for population.

The special needs class, had plenty of male students but very few male Learning Support Assistants which didn't help when every Wednesday they went swimming and needed a bloke to keep to an eye on proceedings and make sure no one went absent without leave (so to speak).

While Tom swam one mile a hour, I struggled with a twenty lengths or so...

I'd never worked within education or with students with special needs. From being a past student when taking an Access Certificate to Higher Education it was a place I was very familiar and would lead my journey back into education and, years later, my prized degree.

It was one of the most amazing experiences of my life.

Without realising it, I walked into a classroom, more nervous than the students, and met some of the most magical, insightful and wonderful young people I could ever wish to find.

Young men and women from late teens to their early twenties.

The most accepting, humourous, funny and loving, intelligent, humans on Earth.

Rich, they would make Elon Musk look like a cheap aftershave.

Weeks past and I was one of the gang. I was there to supervise but it was more like having a day out with your mates. Well, a day out at the College. In fact, I'm pretty sure most of the mainstream students thought I was one of the special people. If they did, I took it as a compliment.

I worked closely with two students. I won't mention their names for obvious reasons.

Clark* was a young man in his early twenties: tall, beautiful hair, chiseled cheek bones and defined jaw line, model features. You wouldn't believe this, but knowing different shapes can change your life.

I mean, who would believe such a story?

He, like many of the students, had been in the care system from an early age and had the opportunity to find a very loving family. However, this decision would be made in court. The future of this young man was in the hands of a judge.

Thank heavens for the trapezium!

It may have been the boid, rhombus or pentagon.

Clark had a fascination with shapes. I think he was a Professor of Shapes. You could have unveiled the most obscure shape you've ever seen (or not).

If someone said ''scutoid'' I'd be convinced it was a body part.

In fact, sitting next to him in class, I felt seriously lacking. If their had been a test on shapes the whole class new who would be getting A+.

At the court hearing, Clark had his box of shapes, showing the world and his wife (and the judge) that there wasn't a shape in the universe that he didn't know.

As soon as the judge witnessed the Professor of Shapes doing his thing, he didn't need to think too long or hard.

He knew more shapes than the judge!

What could he say.

The other young man was incredible. For such a young life he had so many operations on his feet and legs. When changing for swimming, the scars where painful to see. However, nothing could dampen his spirits or his gift to me, you and everyone who took a moment to feel his nuclear energy couldn't help but smile and feel their heart swell with pride.

He was the most humourous person I have ever met. It was like the best ten comedians you have ever seen wrapped up in a body that didn't work perfectly, but like the bald man using his bonce as a prop he took everything in his slightly-limping stride.

Once in the class I asked him to write a few words. He wrote a scribble and was pleased with his effort. It said exactly what I had asked (to him). It looked like the signature of Warren Buffett.

It didn't matter a jot.

Becuase as I walked with this young man to the refectory, everyone who saw him had a smile on their face, new his name and clearly loved him.

In fact, when we entered the refectory (stage doors), it was like an audience had seen the star act appear. The beaming smiles, people waving, saying his name...and in return they saw the man himself shine like the brightest star. He waved, blew kisses and after deciding what looked the best thing on the menu we sat down for lunch.

What I learned is that the richest people come in all shapes and sizes, and they are just waiting for you to realise who they are.