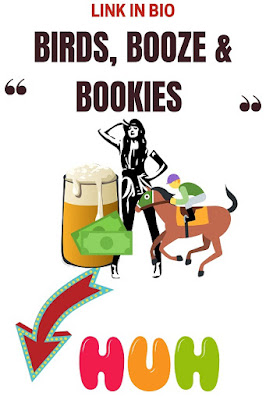 I heard that quote uttered from the mouth of Terry Mcann while watching an episode of Minder.

It was made in reference to a rogue football player, very much in the mould of George Best. I guess they didn't want to say his name for legal reasons.

As it happened the actor playing the role of the said footballer was a bronzed and very good looking Karl Howman. He was a big name in TV back in the mid-to-late 80s in Brush Strokes, Mulberry and other worthy dramas. More recently, he played Buster Briggs in EastEnders from 2014 - 2016.

(What a depressing pile of shite...)

Both Dennis Waterman and Howman now senior citizens haven't aged too badly considering the actor's life must be one of famine or feast.

When I hear the quote: Birds, Booze and Bookies it reminds me of a turn of phrase from the 1970s.

A time when men had open-chested shirts, excessive hair and a medallion.

Isn't it strange how these days no one works in factories any more.

Considering the first episode of Minder started in 1979 and the last in 1994 I may be stretching the chronology a touch. Perhaps it was made in reference to years gone by as I'm not sure if Minder was actually set in the present day (as it was back then).

George Cole playing the role of Arthur Daley, the Winchester Club with Dave behind the bar and the only place on planet Earth where you could ask for a VAT and it didn't cost you an additional 20%.

I hate to say it, but the worst part of Minder was when Gary Webster turned up. If you haven't got a clue who I'm talking about, it's a generational thing.

I guess many of our old TV programs are now struggling with the test of time. It was a different era where you wasn't one of the boys if you didn't say something sexist, racist or dubious every other sentence.

The only people to adorn a beard were teachers, magicians and pedophiles.

There's a reason why Alaskan men have a beard. (It's cold!)

But some do-gooder would have changed it to fromage-making peasants...

Fromage is French for cheese.

How times have changed.

Once upon a time you could afford to go to the pub and drink 10 pints.

You'd chat up a bird and they didn't give you the look of the devil because you dared to open a door.

And bookies were a place punters went to get away from the birds while nipping in and out of the pub to get boozed up.

I know it's a fact that as we get older the good, old days seem much better, enjoyable, fun and real.

I guess all future generations will look back and think the same.

However, I think the day is coming when the youngsters of today look back and forward and say: ''It was shit then, and it's even worse shit now, and the future looks distinctly shitty.''

It's the same with gambling.

In the old days win, lose or draw punters just got on with it. They appreciated - however hard - that if they done their dough it was their own stupid fault.

Bookmakers and gambling has changed into a mirage of caring. When the shit hits the fan, wipe your arse and stop eating curries...''

The bookmakers follow sport around like a dark cloud with a pretend rainbow flickering like an old gal lighting a fag. Look closer and you see the cloud is made of cotton wool, air-sprayed for realism, a splodge in a blue sky hiding a shoal of hungry piranha.

Bookmakers are not what they seem.

They have nothing to do with gambling and all about manipulation of the people they call customers.

I don't know about you, but I'd quite like to go back to the days of Birds, Booze and (True) Bookies.

I'm sure John Lennon would ask: Where the f*** has Honest Joe disappeared to?

Somehow, it was a very different world.

Read our last post: You Can't Have A Big Appetite In Someone Else's Refrigerator