Cheating at the Hands of the Skinny Men 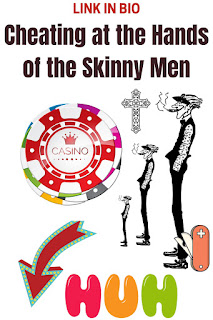 I guess most casinos have plenty of security to make sure people play fair. Now, I wouldn't like to say these dens of iniquity are homes for the less savoury characters of life but where there's money, especially gambling, you may get a few tea leafs with fingers so light they can bend a spoon in the time it takes to say Uri Geller.

You know he does all that with the power of the mind.

I can't say I have seen too much jiggery-pokery at the casino (not even at the card table).

The home of respectability, Great Yarmouth Grosvenor Casino is known to sprinkle dubious amounts of Holy Water about the gaming room before opening time to ward off evil spirits. They once had this character turn up who was the spitting image Kurt Barlow who terrorised the punters and staff.

However, I did see a sly move at the roulette table at Nottingham.

An affable gentleman with much to say was betting with £25 chips but seemed to be enjoying a chat with staff as much as the prospect of winning cash.

I didn't say anything because I'm no snitch. However, a tea leaf (thief if you are reading the A - Z of Cockney rhyming slang) pocketed the chips and walked off.

The affable gentleman, observant enough, to realise he had a win asked where his winnings had gone.

So they checked the camera, which took about one minute and the manager of the casino swiftly walked over to the tea leaf who probably should have moved a bit quicker and basically asked him to return the winning chips which he did with the feeble excuse of saying he thought he had won, they were his.

In this modern world of law and order (especially casino security) justice is served in a more humane way of tempered punishment but an equal measure of rehabilitation.

In the African tribe where I imagine roulette is a game a few play, anyone who steals or cheats their own would be given to the skinny men who would make 20-years in solitary confinement seem like a pleasurable experience.

Well, the skinny men weren't named for being the antithesis of a fat, chubby bloke and they certainly didn't mince their words. (Although they worked in silence).

They were part of the camp to keep everyone in line, understanding however tempting, you don't steal stuff that isn't yours - else they'll skin you alive.

You don't mess with the skinny men.