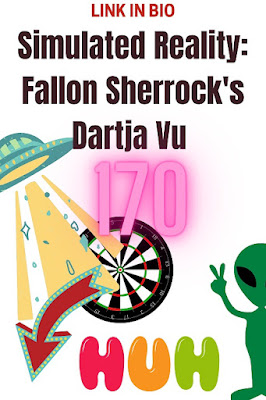 Have you ever questioned the reality of the world you live?

I can't say I believed in all this stuff until the other day. I guess these things have to start somewhere. Even though I like a bet, I didn't expect to question whether I lived in a simulated reality while watching Fallon Sherrock beat Gabriel Clements at the Grand Slam of Darts. I didn't question anything until those last three darts and 170 checkout.

That's the moment I started to question whether my life wasn't so far from Neo living within The Matrix.

Didn't it all seem a little too likely to happen?

And then she plays Mensur Suljovic who she had beaten before. As Mardle says: ''Dartja Vu.''

''She's not afraid of crossing the finishing line.''

There's me thinking in a world where everything is preordained, a computer code just runs until the end, and then the crowds cheers with delight.

Thinking about it, Sherrock was a certainty to win. I even said it to my brother after she finished Clements with that one-hundred-and-seventy thunderbolt.

And now she's in the last eight and playing Peter Wright who looked decidedly average. He says: ''I'm not playing good enough to win the Grand Slam.''

Doesn't this all sound like another reason why Sherrock will bulldoze Peter Wright?

I can't help feel the simulated reality wants to show off a little and throw in a nine-dart finish or conclude another win with a 170 checkout. You've got to remember that in this simulated reality anything is possible.

Fallon Sherrock could throw a dart from the top of London Bridge and hit double top.

Basically, anything is posisble.

What puzzles me most is what is the reason behind this simulated reality and more worrying who is running this elaborate computer code?

It's literally written in the stars. Sherrock will beat Wright, destroy Van Gerwen before thrashing Gerwyn Price in the final.

There's only one reason that won't happen. If the machine, being, alien, or someone on this mortal Earth decides that we are starting to question our very reality.

If that happens, she will lose.

This is what happens when you live in a simulated reality
Read Our Last Post: New Gambling Drug Brings Fear To Betting Industry
Email ThisBlogThis!Share to TwitterShare to FacebookShare to Pinterest
Labels: Fallon Sherrock, Grand Slam of Darts, Simulated reality