The Man With 3 Hats 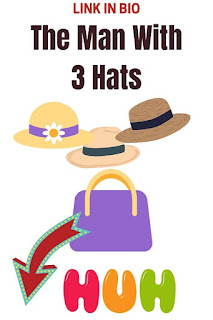 For all I know, it could be. Many readers will know of my love of Great Yarmouth Racecourse, which resides in Nelson Country on the Norfolk Coast, a stone's throw from Caister-on-sea.

You may read these stories on Brasino and question if they are true. Is she using a bit of poetic licence? I was going to try and think of some witty play on words but can't think of anything that rhymes.

However, you really don't need to concern yourself with fake news or propaganda, as this post is 100% true and I even have a witness in Dan The Man, if needed. As it happens, we were in the Trafalgar Bar at Yarmouth racecourse. Danny had a pint of Carlsberg and I had a creme de menthe, while people-watching.

I noticed one or two well-dressed gentleman who stood out from the crowd. They didn't have a hat on their head, but elegant, and I couldn't help wonder if they had come from out of town. I don't like to be disparaging, but elegant attire isn't usually the norm at the racecourse.

I applauded their efforts.

I noticed a man in his 50s at the bar. He was carrying a bag. I'm not sure whether he had bought a drink, intended to purchase Sex On The Beach (cocktail) or finger the menu. I'm pretty sure I noticed this gentleman on the terrace adorning a pink hat. It looked a bit like a bowler hat and he was wearing a pair of glasses in the style of steampunk. He caught my attention as I said to myself:

He was deep in conversation with the lady behind the bar. One by one, he took a different coloured, styled hat from his bag. From what I could see, he had three hats.

Danny was watching, too. Mesmerized by hats of every colour (well, three colours). The gentleman putting on one hat after another to show the lady.

To be honest, I haven't got the slightest idea where the hats come from, whether he had made them, wore them for a photo shoot, was trying to sell them to all and sundry or just couldn't quite make up his mind when leaving his house.

In my vivid imagination, these were magic hats. If you put one on your head, place a bet, you win.

You may be thinking this sounds like a load of horse shite but do we really know what the man in the hat was doing?

What was his story?

A little while later we left the bar and wandered around the betting ring.

I never saw the man with three hats again. I'm pretty sure I won't, although if he loves Great Yarmouth he might, one day, be walking up Jellicoe Road.

If I see him, I'm going to pluck up the courage to ask him about his hats.

Something tells me his story is a real gem.

Read our last graphic post: Are You Scared To Gamble?