The Sweet Smell Of Success 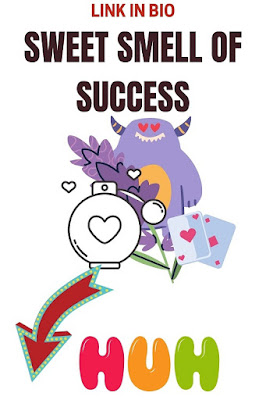 It's not every day you bump into a man who is eight-feet tall.

A towering beast of a man, as wide as most people are tall, his face covered by a big bushy beard and fetish for wearing leather. I was tempted to say he looked like a super-sized member of the the Village People but I wouldn't say it to his face. When he walks down any street, people turn and stare. He literally stands head and shoulders above the tallest person you have ever seen.

But the strangest thing, as he walked past me I was hit by the a faintest smell of...lavender.

Why would a hulking man smell like your great aunt or a small child eating parma violets?

Perhaps I just have a very sensitive nose.

Anyway, there's a fascinating story to told and I'm going to tell you this intriguing chapter.

To protect the interests of this man I won't say his name or where he lives. Although if you see an eight-foot giant down the street or at a local casino, he could well be your man. If he has a sweet perfume wafting as he passes on by then it's odds on he's in your vicinity.

Whatever you do, don't talk to this man or mention this post as my life won't be worth living.

If he knocks on my door and I'm playing In The Navy on my vintage record player the front door may be lifted off its hinges, followed by may arms and legs being thrown in different directions.

Added to the mix of truly contrasting thoughts, he is a professional poker player.

Now, I'm not saying I met this character at Great Yarmouth, but I did notice a great white shark had escaped from the Sealife Centre.

I'm not exactly sure which type of poker he plays because it's not my thing. But he's had some big wins. However, he only plays live matches and his ability to win online is dire.

He is one of these rare breed of people with an exceptional sense of smell.

This may have been a natural phenomenon but it has been a skill honed by desire.

I fact, his sense of smell is so acute that he's the only man I have ever met who uses the word hyperosmia and a student of aromachology.

Here's the strangest thing, if you sat next him at the card table you wouldn't smell the slightest hint of lavender. However, to him it's like he's walking through field in Provence, France, in mid June.

As the cards are dealt, he senses a very distinctive smell.

Unsurprisingly, a smell of lavender.

That sweet smell of success.

Be assured that no one in the room has the slightest sense of any aromatic, except, perhaps, from last night's curry working its way through the pipes.

However, if he's sitting with a pair of kings and aces, you may well see his noise twitch as he takes a deep breath and knowing smile. He can sense the card that sits before him makes a full house even before he has turned it over.

He goes all in and says to his opponents with disdain: ''Your luck stinks.''

Because throughout the game he covertly marked each of those kings with a dab of lavender which, added to an incredible sense of smell, means he can see those all-important cards as if they were face up.

Perhaps one in a thousand people have this Midas sense of smell.

If you're playing cards and get the faintest smell of lavender waft your way, take a closer look at the players around the table. If you see one of the Village People caressing his cards with a smile on his face you just bumped into my nemesis.