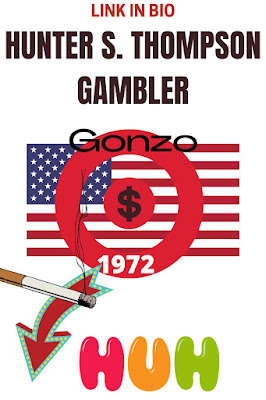 I can't say I knew much about Hunter S. Thompson until I watched the film Fear And Loathing in Las Vegas.

There after, I purchased the book. Without doubt, he was a gifted writer. There is something about his prose which have that cutting edge.

Considering Fear And Loathing in Las Vegas is predominantly based on living life on the edge with a cocktail of drugs and gambling, you'd be thinking he loved a bet.

In fact, doing a little research, the man himself was referred to in an article published by Kevin Pullein in the Racing Post: Hunter S. Thompson can give us some sound betting advice.

Hunter S. Thompson said: ''There is a definite, perverse kind of pleasure in beating the 'smart money' in sports, politics, or anything else.''

In a book he wrote in 1972, he said some 50 - 60 bets placed on the presidential campaigns and betting on the primary rounds with a combination of ignorance and a natural instinct to mock the conventional wisdom. Between the months of February and November he lost on just two bets.

He did the same in the 1974 Super Bowl, published in Rolling Stone magazine. He said: ''There's definitely, perverse kind of pleasure beating the 'smart money' in sports, politics, or anything else.''

He noted: ''The formula is seemingly dangerously simple: take the biggest odds you can get against conventional wisdom but never bet against your instinct.''

Hunter was a master at working in the way he could talk about Fear And Loathing in Las Vegas and The Kentucky Derby is Decadent and Depraved, but without talking about gambling or horse racing.

Hunter said: ''Unlike most of the others in the press box, we didn't give a hoot in hell what was happening on the track. We had come here to watch the real beasts perform.''

He loved to bet.

He bet against conventional wisdom, with care.

He detailed that everyone tries to win by conventional wisdom.You cannot do this and win. But by definition, this is what everyone else does.

So often reputation precedes the new star whether sportsman, horse or anything else. But when do you here the opposing story that they may disappear into obscurity.

In the glittery world of hopes and dreams, hardly anyone acknowledges the other possibilities.

It's why when gambling you have to find your own approach which goes against the crowd. That's why the least likely option often details the value. It's true that most bookmakers set their prices knowing that most punters follow a certain pattern. This is the conventional wisdom. That what we have seen before we will see again.

This is the approach of scientists, too. More often than not, they are proven wrong. In fact, most discoveries and advancements come from mistakes, serendipity. The story of Viagra, originally considered a medication for baldness. Until they got the feedback from the participants who had something to say about a surprising side affect.

How is it that most published research finding are false. When replicated, almost 75% of famous studies were proven wrong.

Most published science is wrong.

What you have to remember is what these scientists saw wasn't wrong. They didn't go out to mislead. The data was taken accurately. The trouble is perception. What one person saw wasn't the same as another.

We all see things differently.

Hunter S. Thompson would have said: ''I told you so!''

Except he would have said it in his own colourful words.