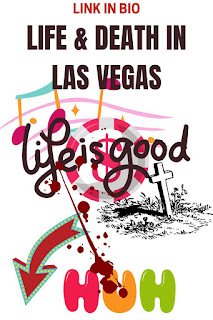 I can't say I have ever been to Las Vegas.
Being a fan of Hunter S. Thompson I've read the book and watched the film: Fear & Loathing in Las Vegas.

Would I like to go there? I guess I'd like to see what all the fuss is about. They say you shouldn't stay for more than three nights.

Your guess is as good as mine regarding why that fourth day is, potentially, so problematic.

Is 72-hours enough time to lose all your money?

Enough time to say 'I Do' to an Elvis Presley look-a-like.

Be accosted by a prostitute and ripped off.

Beaten up by a pimp.

You will notice that nothing bad has ever happens in Las Vegas! Nothing negative is ever reported. It's against the law. Literally. There are no robberies, suicides, mass shootings...

Nothing happens in Nevada. Well, nothing bad. Only life-changing, positive moments of winning, getting married and it's happily ever after.

They don't want any bad PR.

So don't ask too many questions.

I remember watching one of the episodes of Louis Theroux, Gambling In Las Vegas. You're greeted by an array of sad people with even sadder stories. A place where your friends taunt you with lyrics from Kenny Roger's song, The Gambler, until you either rob a bank, kill a croupier, jump off the top of the Bellagio Hotel or just book your flight to do it all over again next year.

Theroux, forever straight-faced, asked a guest how much money they had lost.

Or the old women who played the slots and lost millions and laughed about the loss of her son's future inheritance.

If ever a women needed to trip down a long flight of stairs, she was the ideal candidate.

Nothing stops the money-making juggernaut.

An armed robbery took place in one casino where a gun went off as a security guard wrestled with an assailant, a tourist in the wrong place at the wrong time, shot in the head, killed instantly, laying in a pool of blood.

The casino was shut for 20-minutes as the body was removed, a square of blood-stained carpet removed and replacement glued down as if nothing ever happened.

Not a word in the local papers, news channels, anywhere.

''Did you hear about the person shot dead at that casino the other night?''

Nothing stops the pursuit of making easy cash.

Not even Kenny Roger's playing a new tune on an old fiddle.