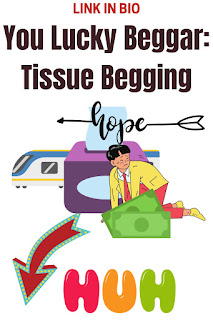 To be fair, if I had a cold and desperately needed the small pack of tissues placed on the unoccupied seat, I may well have been tempted to put a pound or the spare change from my pocket on offer, a rare smile appearing on the face of the mysterious tissue beggar.

Next to the tissues, there was a little piece of paper, no bigger than a business card. I can't remember what it said word for word but it was along the lines: ''I'm looking for work and have a family to support so if you wish to help, then pleased give some money and in return I will give you a packet of tissues as a thank you.''

I wish I had kept the little note, but I left the printed card and tissues where I had found them. I had read the card, saw the tissues, and thought about the situation.

Being from the countryside, I wasn't used to such things and slightly surprised by this happening.

If the person had been walking about in dirty clothes and looked like they had slept rough I may well have placed a pound coin on the seat.

However, the man in his mid-twenties looked very well dressed in a white t-shirt that was either brand new or been washed in Persil non bio powder. They looked as well off as anyone on the train if not a touch richer.

I considered how generous I felt.

After about ten minutes - probably the time it took to walk to the end of the train and back - the man appeared and picked up the tissues and note and disappeared out of view.

Whether right or wrong, I was left with the impression the person wasn't hard-up, struggling for cash or had a family waiting at home with thoughts that my contribution or not would make a good or bad day.

When I see people I often wonder what is their story?

I remember being in West Palm Beach, Florida, and seeing a homeless man, with a big bushy beard, pushing a trolley, and protruding, erect, was a piece of four-by-four wood and the stars and stripes flag waving proudly in the wind. The contrast of one thing and another made me question what on Earth I was seeing. It filled me with despair. I wished I could have stopped the car and got the full story because I really needed to know the score. A beggar in the land of opportunity. A patriotic soul down on his luck. It has to be one of the most mysterious, saddening and troubling images I've seen. Of course there are worse thing to see in a country with more guns than people. I said to Marlene: ''I wonder what is that man's story?'' She drove on not particularly bothered or concerned. I don't think she did this because she didn't care but in a world of rich and poor, those in between have enough to think about...

Like the tissue man, I couldn't help wonder what was his story.

If I asked, it's unlikely I would get a truthful answer and even if I did I probably would believe it.

I wasn't sure what to think about the whole experience.

For them to be doing this, it must have been a payer. Perhaps they went home with a bundle of cash and lived a seemingly ''respectable'' life somewhere in London. I know this much, he could afford to get his t-shirt cleaned ten shades white and if I had placed a pound on the seat his smile may have been the same.

On my return, waiting for the train from Kings Cross to Ely, I saw a number of homeless people. One walking about in a duvet as if wearing a coat. He looked warmer than most. A girl came up and asked if I would buy a copy of the Big Issue. She looked a bit down on her luck so I gave her £2.

Clearly understanding the odds that someone who was good enough to give £2 for a magazine to help was a soft enough touch to give both back for free she'd got me hook, line and sinker. That elusive last copy of the Big Issue was back on sale to the next dope on a rope. She must have walked away with a smile and, in the process, made a country bumpkin a little less rich.

I didn't begrudge her enterprise.

In truth, I think she was a better recipient than the tissue man.

It's intriguing what people do for money.

You can guarantee they are bloody good at it too.

Desperation is a good motivator.

Read our last post: The Bonus of all Bonuses