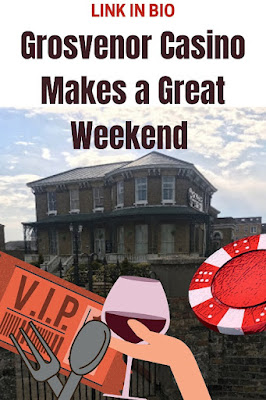 It was great weekend.

To be fair, the main reason my brother and I went away for the weekend was because of the generosity of Great Yarmouth Grosvenor Casino. You're probably thinking we were spending our winnings but it was actually a free promotion and invitation to a meal for two, a bottle of wine and £50 of chips to play in the games room.

That would lead us to Great Yarmouth...

However, the Andover House Hotel was fully booked so we had a change and visited Gorleston-on-sea which is a couple of miles up the road. We decided to stay at The Cliff Hotel, which is a decent establishment, not far from the seafront. We had a room with a balcony and sea view.

I was a bit annoyed that the price we paid was more expensive than the Black Friday sales, which I only noticed after looking on an online platform. Considering we paid direct to the hotel I wasn't best pleased and sent them a message saying as a gesture of goodwill they ought to give us a free breakfast. I got no reply. I didn't make an issue but for that reason it would put me off staying there again. I wish I had stayed at the Pier Hotel, which sits on the front and looks a lovely place.

You may remember the film Yesterday, directed by Danny Boyle, starring Himesh Patel and Lily James, where the struggling musician meets with an accident during a blackout and wakes to find that only he remembers the Beatles. He starts singing the band's songs to gain fame.

The film was a great success and made a profit of about £100M. The Pier Hotel was featured in the film, you can actually book the room where the beach scenes were filmed for £170 a night. It looks a lovely hotel and perfectly situated to overlook the beach which is one of the top 10 in the UK.

Gorleston might not be the first place people consider for a weekend away but its a lovely town and the people friendly.

The experience at The Cliff Hotel was good, the breakfast very good. It was a decent stay.

On Saturday morning, we went for breakfast at Margot's Lounge, which is a well-run business with plenty of bling. We had a bacon and egg butty and tea served from a quaint teapot and china cups. It had a steady steam of customers, who all looked like they had money to spend, and I would go back.

On Saturday evening we walked into Gorleston High Street, and got a taxi to the Grosvenor Casino. The High Street is much better than Yarmouth's as it isn't all about tourist sales and tat. I was surprised by the selection of shops from My Plaice Fish & Chips, to a cinema, pet shop with Java Sparrows, and restaurants including the Olive Garden. It's a good, long streets with plenty going on.

We arrived at the Grosvenor Casino about 8pm. It's always a delight to visit the listed building and the staff are excellent. It really is a beautiful place. I'd recommend it to everyone who likes a bet. I've been to other casinos but this place has it all.

We went downstairs into the gaming room, and asked at the cashier's box to ask about the free promotion and it was explained. It was a meal for two plus a bottle of wine, and £50 of free bets, which equaled £100 for nothing more than being a regular who writes a post or two to tell our gambling stories. It wasn't because we go and lose a grand on a regular basis. In fact, believe it or not, I'm winning money because I bet small stakes and enjoy the entertainment and venue rather than turn up with aspiration of winning big. As any gambler at the casino should know, the longer you play the more you will lose. You can only win at the casino by getting lucky and putting the money in your pocket. I'll talk about the betting in a later paragraph.

The meal was lovely, rump steak and chips. Tony, my brother, had some beef dish. We ended up giving the bottle of red wine to the lady at reception who was good enough to book us a taxi on leaving and tell us when it had arrived.

I must admit it made me smile when going to the roulette table with my £50 worth of chips. 10 chips which looked nothing like those at the table, because these were given to just a few customers. It was funny because the chip displayed 5p, but in small print it said: ''100 times the odds'' so, basically,  each chip was worth £5. A few of the players gave me a bit of a rye smile seeing I was playing with my ''lucky 5p chips''. I noticed and said: I'm the last of the big spenders.'' It just shows you don't always want to believe what you see because each of their chips were worth 50p or £1. So, in truth, I should have been laughing at them. I stuck with number 18 hope that I'd get lucky as it would have paid £175. It went next door once and that was that. I'd have loved to see the others faces if I'd have won because my ''5p chip'' would have paid £175 +5p (worth £5). I had ten bets on that number and called it a night.

When the free bets concluded so did my gambling. I'm sure they only give these free promotions to test my willpower. I have the utmost discipline when betting. Tony got lucky and won £30 or so. We stayed no more than 3-hours, which is plenty enough for me. After a while betting on the roulette can get boring. It was lovely to be back and the staff are just brilliant. We go to Great Yarmouth Casino on a regular basis and it is all about the experience and entertainment, on a budget. You really don't need to go crazy and spend out. In fact, it's much more enjoyable playing the game of not losing your shirt.

Sunday morning we left The Cliff Hotel, walking along the front, past the Belle Vue Inn, which we frequented the day before. The landlord was a lovely bloke and the regulars funny with their wit and wisdom and a big black Labrador called Guss who was a sniffer dog for food which he was interested. The two dog walkers, sat down with a house double vodka and pint of something. It was a merry pub and I'd go there again.

We got a taxi back to Great Yarmouth Market Place, driven by a delightful lady who hadn't lost her broad Scottish accent even though she'd lived in Gorleston since the 1970s. In fact, she said she had her wedding reception a The Cliff Hotel in 1977.

A quick cup of tea at the Pub On The Prom and we were on the train back home, changing at Norwich and Ely.

It's always a delight to see the cathedral come into view at Ely.

It was good to get home and have a cup of tea.